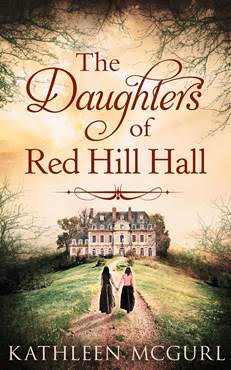 When Gemma discovers a pair of ancient duelling pistols encrusted with rubies in the basement of the local museum, she is immediately intrigued…

On a fateful night in 1838 two sisters were found shot in the cellars of Red Hill Hall. And when Gemma begins to delve deeper into their history she begins to realise that the secrets of that night are darker than anyone had ever imagined.

As the shocking events of the past begin to unravel, Gemma’s own life starts to fall apart. Loyalties are tested and suddenly it seems as if history is repeating itself, as Gemma learns that female friendships can be deadly…

My opinion.
With a stunningly gorgeous and intriguing cover (and blurb) like that, I knew I just had to read The Daughters of Red Hill Hall. 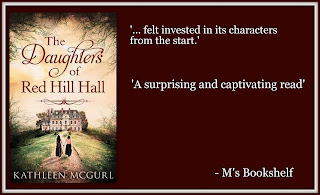 To say that the author, Kathleen McGurl, gave her story some unexpected twists and turns would be a massive understatement. Just when I thought I had the characters and the story-line figured out, she threw one curve ball after the other. Loved it.So I'm definitely not claiming I knew what was coming, but I did feel uneasy with both S. and N. from the start. I did not trust them and the amount of trust both R. and G. put into their friendships was at times even frustrating. The levels of betrayal were so horrible I actually felt physically uncomfortable and closed the book a few times to take a deep breath and remind myself that it was fictional, after all.
The story alternates between past and present and I enjoyed piecing the puzzle together (although maybe it would have been ok. to have some details of the past revealed at a later moment in the story, along with Gemma's research. Because now we always discovered the next "puzzle piece" right before she did thanks to the alternating chapters).
I truly enjoyed reading The Daughters of Red Hill Hall and felt invested in its characters from the start. A surprising and captivating read. 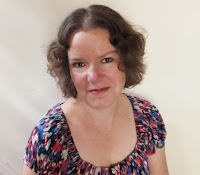 About Kathleen McGurl. Kathleen McGurl lives near the sea in Bournemouth, with her husband, sons and cats. She began her writing career creating short stories, and sold dozens to women’s magazines in the UK and Australia. Then she got side-tracked onto family history research – which led eventually to writing novels with genealogy themes. She has always been fascinated by the past, and the ways in which the past can influence the present., and enjoys exploring these links in her novels.

When not writing or working at her full-time job in IT, she likes to go out running or swimming, both of which she does rather slowly. She is definitely quicker at writing.