When Trend magazine contracts Lindstrom & Sons to manage a fashion shoot in Yellowstone, easygoing Lars Lindstrom rolls his eyes at the assignment. “Babysitting” supermodel Samara Amaya’s assistant for a week sounds like a snore, even amidst the park's lush wildlife and scenery. Little does he know that spending time with Jane Mays, Samara’s down-to-earth, smart-mouthed assistant and cousin, will be the most exciting week he's ever spent. Her smoky voice and surprisingly sweet heart are everything he never knew he wanted.
Jane has been hurt before, but this time her handsome tour guide seems a perfect match. From loving the same music to some effortlessly sexy sparring, Lars "gets" her, and Jane can't seem to keep herself from falling for him...until Samara blows into town. Used to living in Samara's shadow, Jane knows that Lars will be nothing more than a notch in a bedpost if the spoiled supermodel has her way. In the past, maybe she would have stepped aside. This time, Jane'll find the strength to stand up to her cousin once and for all…and trust that Lars will be there to catch her if she falls.

I'm a big Katy Regnery fan! To learn more about her and her other books,
check out my previous reviews and posts here!

Katy is also currently taking part in my BDay Giveaway!
For a chance to WIN her fabulous books, click on the banner below: 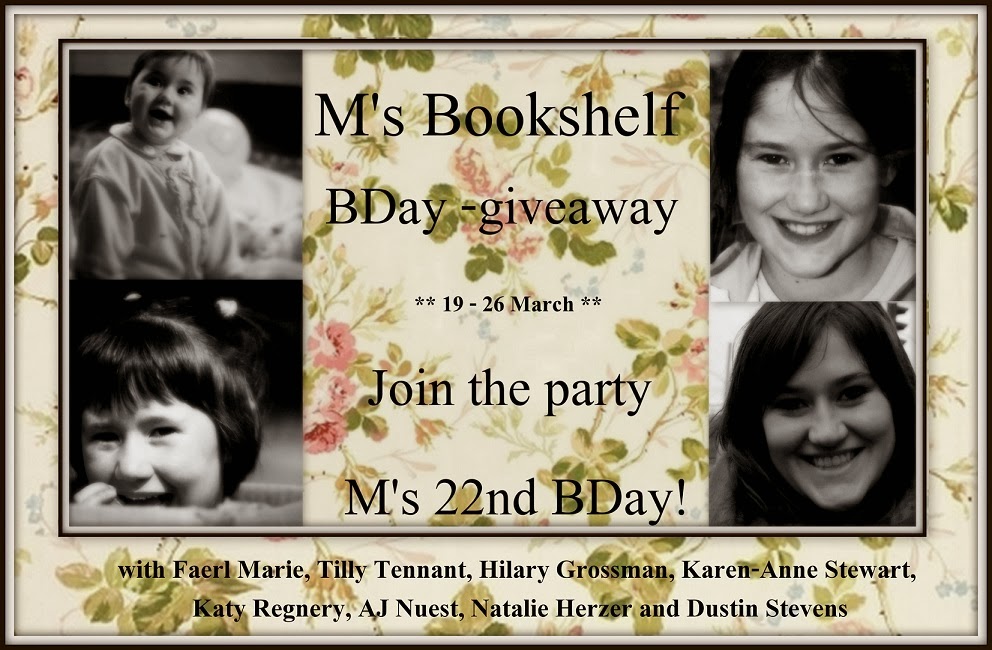 “You know you’re cute, right, Jane?” Lars asked.
“You don’t have to say that.”
“I wouldn’t if it wasn’t true.”
“All part of the service.”
“Nope, that’s my personal opinion.”
Jane had had just about enough. “You don’t have to do that.” An edge crept into her tone.
He pulled over to the side of the road, put the car in park and cut the engine, looking at her. “I don’t have to do what?”
“You don’t need to butter me up. You don’t need to flatter me. I’m the assistant. Let me school you here, Professor… I’m the girl that’s the friend, Lars. I’m the girl you talk to about the girl you’re going out with on Friday night. I’m the girl who tells you which restaurant to take her to, and what kind of wine she hopes you’ll order. I’ll even come over beforehand and help you pick out what shirt to wear, and if you forget your wallet while you’re out with her, I’ll jimmy your bedroom window open, find it in the pants you wore yesterday and drive it over to the restaurant. And when I hand it to you, she’ll look at me like I’m nothing…and--”
“Jane.”
“What?”
“Stop talking.” In an instant he had unsnapped his seatbelt, unsnapped hers, slipped one arm around her waist and pulled her across the seat next to him.
He placed his hands on either side of her face and before she could completely get her head around what was about to happen, she felt his lips brush gently, but firmly, across hers.
Her eyes closed, tearing up from the unexpected sweetness of his reassurance, and as her lips opened in surprise, she kissed him back. His fingers played with her curls, tilting her face exactly how he wanted it, moving his lips with more urgency.
She lowered her hands to rest her knuckles on his thighs, and he moved his hands from her face down her arms to her hips where she felt his fingers curl into fists along the waistband of her jeans as the kiss deepened, as he slipped his tongue into her mouth and pulled her closer to him. His tongue plunged deeper, satiny and stroking, making her dizzy from the contact, her breathing fast and fierce as her palms pushed down on this iron muscles of his thighs.
Her heart pounded, her head was spinning, her insides a swirling mess of longing and warning, feuding in the overwhelmed territory between her head and her heart. She felt his fingers graze the skin of her waist under her shirt, which made goose bumps rise all over her body, and somehow prompted her back to reality.
“Wait.” Jane drew back, panting. She didn’t dare look into his eyes, staring at her hands on his leg instead, listening to the sound of her breathing, which was amplified in her ears, heavy and ragged.
She unfurled her fingers and reached up to touch the tender, hot skin of her lips with a tentative caress, finally looking up at Lars. He was watching her, searching her face with a frank, unapologetic, unwavering gaze. She read it quickly; Hungry for more, but happy with what he’d just gotten.