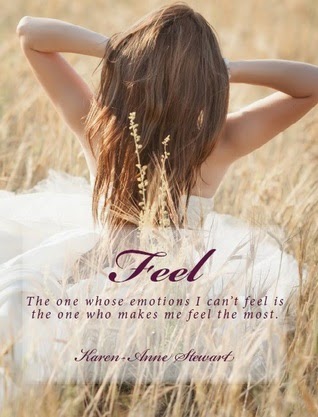 The one whose emotions I can’t feel is the one who makes me feel the most.
I was a sensitive, at least that’s what I was told by the boy who saved me from the overwhelming emotions that consumed my soul, the boy who saved me from myself when my gift became stronger. Through the years, he was my redemption, my reason to take my next breath…then, he was gone.
Jensen always told me I was strong, but I didn’t believe him until I was forced to be strong on my own, and I kept breathing without him. I’ve taken 42 million breaths since the moment he sent me away. Now, four years later, he’s standing in front of me, and I can barely breathe.
This isn’t just a story about the abilities I possess; it’s a story about something much stronger…the love of the man who possesses every part of me.
***Disclaimer – Feel is intended for readers 18+ due to strong language, mature scenes, and some violence.

My opinion.
Karen-Anne has done it again. Yet again she had me completely captivated and a little (book) hungover. Her characters are yet again so detailed, so complex, yet so easy to love. I have a soft spot for her female characters: beautiful, independent and impressively strong woman with a soft side that wants and needs to be protected. Meet Saige. And then there's Jensen... I mean, what can I say? He's a strong, stubborn, protective piece of man candy, not too proud to admit he's completely and utterly owned by the woman he loves. Sigh.
It took me a quite a few chapters to really get into the story, but all of a sudden, from one page to the next, I was hooked. I could not stop reading and I forgot all about my surroundings - completely captivated by these character's journey. Feel takes you on an emotional roller coaster and will leave you breathless.
[I do find the book cover a bit misleading. Somehow it doesn't portray the "feel" (haha) of the book.]
There's just something so beautiful about the unconditional, passionate love against such an ugly backdrop of abuse and violence in Karen-Anne's novels. She's not afraid to show the ugly, which makes these characters and their love and friendship all the more beautiful and intense.

Thank you so much, Karen-Anne, for the opportunity to read and review
an early copy of Feel. I absolutely loved it.
It was, as always, a pleasure to review for you.

Author of New Adult Romance who doesn't shy away from writing about sensitive issues and hot heroes.


Karen-Anne Stewart has always adored reading and has now fallen in love with writing. Her written works are The Rain Trilogy: Saving Rain, Healing Rain, and After the Rain, Ash to Steele, and Feel (to-be-released December 15th, 2014). Her debut novel, Saving Rain: The First Novel in The Rain Trilogy, was a nominee for the Book Junkie’s Choice Awards, and Saving Rain and After the Rain were nominees for the 2014 RONE Awards.

When Karen-Anne isn’t writing, she enjoys spending time with her family and friends, hiking, and visiting new places. She fuels her addiction of creating new stories by her only other addiction, caffeine, and listening to a myriad of musical genres. Tucked away near the Blue Ridge Mountains, Karen-Anne lives with her husband, daughter, three dogs, and their cat. She plans on writing new adult romance as long as her fingers maintain dexterity. 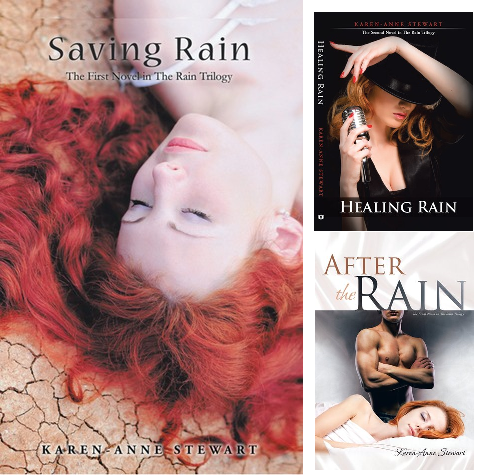