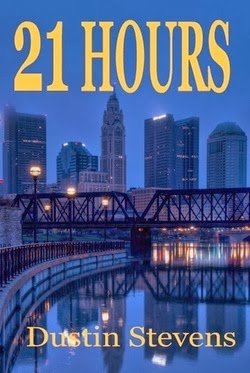 The blurb.
Felix "O" O'Connor is an ex-con from central Ohio that has spent the seven years since being released from prison working on a ranch in the Big Horn Mountains of Wyoming. Rarely does he venture out into the world and never does it come looking for him. Both of those things change when his twin sister Alexa "Lex" Borden calls from Columbus, Ohio to ask for his help.

Earlier that afternoon, she and her husband were both beaten unconscious and their two year old daughter abducted from their front yard. Nobody saw a thing, the police are stumped, and it is a well known statistic that if a child isn't found in the first 48 hours, they rarely are.


O immediately drives back to Ohio and finds himself with just 21 hours to find his beloved niece before potentially losing her forever. Plunging himself into a world he'd long ago left behind, he crosses paths with criminal masterminds, human traffickers, gun runners, drug smugglers, blood-thirsty spectators and suspicious detectives all in the name of bringing her home.

My opinion.
This story is incredibly faced paced. From the moment O receives a call for help form his sister Lex until the last page, everything happens at a thrilling pace. Dustin Stevens draws you in and doesn't let you go. Just like "stopping" is not an option for O in his race against time, you won't be able to stop reading.

This story has everything: it has unconditional love and loyalty, fear, a lot of action, some violence - but not too much so it doesn't dominate the story.
It's just unbelievable what O would do for the safety of his family; a modern day hero - who is, of course, too stubborn to trust in the police and a bit too trigger happy instead of laying low. Although that made me scream at my book "just get out of there!! Call the police!!", it made him the perfect action hero.

I really, really enjoyed reading this book. The only "negative" remark, is about the cover. For some reason the font of the title gives at an outdated 80's-vibe. But that really is the only thing I can say against this book. Loved it!

Many, many thanks to Dustin Stevens for asking me to review 21 Hours.
I absolutely loved reading it!

Take a look at my review of "Catastrophic", a BRILLIANT legal thriller, one of my favorite reads of 2013!