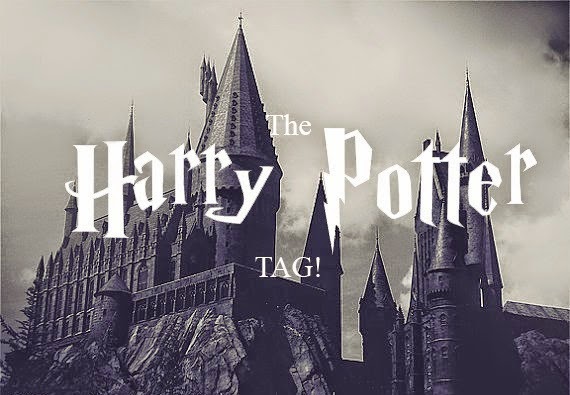 Thank you so much for tagging me, Simona!
You were right, this is thé perfect tag for me ;-)

1. What is your favourite book in the series?

I think the first book, The Philosopher's Stone,
is still my favourite. Just the absolute joy I feel every time I read Harry's first impressions of everything magical... especially Diagon Alley and magical (in more than one way) Hogwarts... It's a book I will reread for the rest of my life, I'm sure.
2. What is your favourite film in the series?
This is a tough one. I think I'll have to go with the Philosopher's Stone as well. Probably because it's my favourite "story" in the series, but also because I remember first seeing the film and thinking that these actors actually ARE the characters. McGonagall, Snape, Dumbledore, Harry, Ron, Hermione, Neville, Hagrid,... each and every one of them felt like characters come to life. Yes, this is true for the rest of the series as well.. But I think this film really set the tone for the other films to come.

3. What is your least favourite book?

I think I struggled most with The Order Of The Phoenix. Apart from Voldemort invading his mind, Harry really has a bad temper and has that typical teenage mood which is usually foul for no apparent reason. I also hated Umbridge with a passion. The injustice of it all... WOW. Of course, this makes it a brilliantly written villain, if she makes me this angry and frustrated... But I felt the least comforted or inspired,... by the magic of Harry Potter (as a series, not the boy).

4. What is your least favourite fillm?

I'll have to say The Order Of The Phoenix again. And yes, again, because it's my least favourite "story" in the series, but I was incredibly frustrated by it's adaptation when it first came out. And even now I still don't really enjoy watching it.

5. What are the parts in the books/films that made you cry?

Seriously? Wow. Ok. Um. Where to start. I remember crying my eyes out finishing The Deathly Hallows. First that bombshell news about Snape's "real" character, followed by Harry's walk into the forest, accompanied by all his dead role models.. I mean.. Ugh! Give me those tissues!

I always get very emotional at the end of the school year as well. Or when Harry talks about Hogwarts being his home... And Dumbledore's death of course. Or when Hagrid gives him that photo album with pictures of his parents.

6. If you could hook up with any character, who would it be?

Hehe. Um. I think I'll go for Ron. I think he'd annoy me at times, but I'd still find him irresistible. I know book-Ron isn't as cute as Rupert-Ron, but still... And he never fails to make me laugh.Purely physical attraction... hard not to be influenced by casting (Neville, anyone?!)... Not sure actually!

7. Who is your favourite character?

It's hard to pick just one, because all of them have so many great characteristics... So I'm just going to applaud all those strong female characters! I really love McGonagall. She's not the most important character, but in a way she's always been a strong constant and I think I'd feel very safe and protected by her... same goes for Molly Weasley. 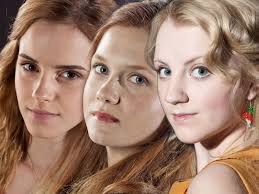 And of course there's Hermione... I don't even think I should explain her...Luna. Oh Luna. So wonderfully weird, but so wise and strong.

8. Who is your least favourite character?
Umbridge. Self explanatory, no? ;-)
9. What would your patronus be?
A cat, definitely. It's my favourite animal. But I did this test Simona used, and I got "cat" as a result! So definitely meant to be. 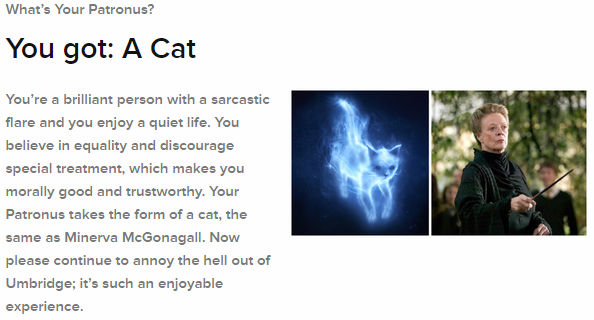