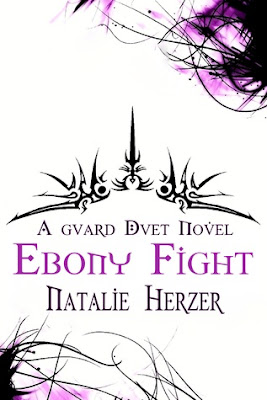 A witch on the run

After allying Lillian’s Ivory Guard, Becca is determined to round up more like-minded demons and Ebonys that could help in their fight against the old system. She knows her actions draw unwelcome attention and that she has to be careful now more than ever before.
So, is she foolish to trust Stone, the man who saves her brother's life - and stirs her blood?

A demon out to get her

Stone is as cold and hard as his namesake. When he infiltrates a group of rebellious demons to find out how far the do-gooder attitude has spread, he doesn’t even blink at his orders to kill the leader. What he didn’t count on was Becca - the hot whirlwind turning his world and heart upside down.

…and all hell breaks loose.

My opinion.
Almost two years ago I read the first installment in The Guard Duet, Ivory Guard, and fell in love with it. So much so that over the past two years I thought back on its characters often, and I was over the moon when Natalie contacted me about the long awaited release of Ebony Fight. 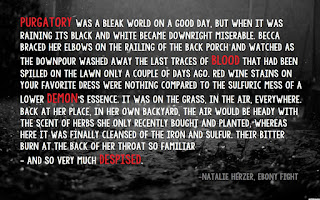 Paranormal fantasy is not a genre I read often, so all credit to Natalie Herzer for creating a world I instantly loved and felt invested in. Ebony Fight brings even more elements to this exciting and complicated reality, in which the lines between good and evil keep blurring over.Becca is a main character after my own heart. She's protective and independent, and very open minded. She doesn't fit into the black and white division of her world, and she - very bravely - keeps fighting for a world in which you are judged on your actions and choices, not your heritage. 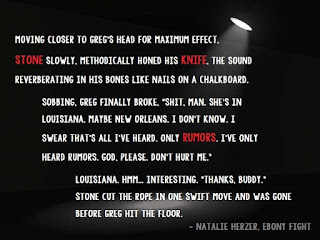 Stone on the other hand is the typical moody and mysterious, but incredibly sexy male character. His story alone could fill a book, which might be why I felt he could have had a bit more of the lime light in this story. But the radiant Becca took center stage and even a strong character like Stone couldn't keep up. The same goes for the rest of the elements in Becca's world: it's a sometimes complicated reality - which Natalie Herzer designed brilliantly - that almost needs a few extra chapters... or books? ;-)Stone and Becca make for an interesting match though and I loved the energy between them.Luckily we catch up with some of the characters we met in Ivory Guard as well and although there is some sort of closure at the end of Ebony Fight, this group of incredibly diverse and interesting characters with their unique bond could easily fill up another couple of books.
In Ebony Fight Natalie Herzer really addresses a wide range of issues (young) adults struggle with. Everything from romance and friendship to the "bigger questions" of why we are here, and what it is that defines us. And maybe even more rebellious: should we just go along with the rules of our society, or is it time to break free?
Even though Ivory Guard had a bigger impact on me as a reader and I felt a more intense connection with the main characters, I truly enjoyed reading Ebony Fight and I would definitely recommend The Guard Duet!