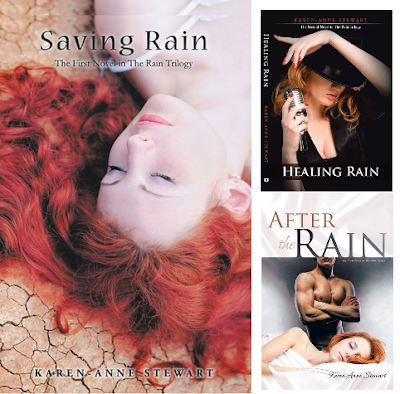 Raina has a very troubled past. From a very young age she has been the victim of abuse. Not knowing how to trust again after yet another man has let her down, Kas has a lot of trouble convincing her he's different; that life can be different. He is a courageous hero who is used to risking his own life to save others, but can he save the one who has captured his heart from her horrific past and the men who are hell-bent on destroying her?
Kas is willing to do anything to protect Raina from her demons and the men who haunt her, going as far as placing his career and life on the line to save hers. Raina will give up everything she has worked so hard to achieve, even flee the country to keep Kas from the wrath and powerful reach of her abusive father.
As Kas and Raina try to navigate through the twists and turns of a deviously intelligent human trafficking group, they find solace in each other's arms. Can they infiltrate the trafficker's tight ring, saving the innocent lives from imminent danger before it's too late?

***Disclaimer: Due to sensitive issues of abuse, human trafficking, and adult scenes, The Rain Trilogy is intended for readers 18+

After The Rain (The Rain Trilogy #3)

The blurb.
Finally able to put her harrowing past to rest, Raina looks forward to her future with Kas, but the Ghost has other plans. As the FBI team gets closer to taking down the largest human trafficking ring in the modern world, the Ghost begins a wicked game, making Raina the pawn and the target. Never before encountering a worthy adversary, he's fascinated by Raina and is enjoying the refreshing challenge of her intellect.


The danger ignites to a blazing new level, and Kas struggles between the need to finally exorcise the Ghost and his need to protect his wife. Tension mounts as an internal battle wages, tormenting Kas as he watches Raina put her all into taking down the man responsible for horrific sex slavery and gruesome deaths. When a new player takes control, Jefferson orders the end of the Ghost's game with Raina, which results in one final, devastating act, leaving Kas desperate and willing to do whatever it takes to save her...by whatever means necessary.

My opinion.
I absolutely love this trilogy. I wasn't really sure what to expect when I started reading Saving Rain, the first book in the series, but from the very first chapter I was hooked. I immediately fell in love with Raina and Kas. Karen-Anne really invested in  her characters and they feel very real. They're not just ideas of people, who happen to play the main part in a story. By the time you've finished the trilogy, you feel like you've known them for years.
[SPOILER ALERT if you haven't read Saving Rain and Healing Rain]

In After The Rain, the last book of the trilogy, Raina is doing great. Thanks to Kas she was able to find happiness again and she got a chance to fight her inner demons. This doesn't mean everything will be easy for her from now on, her past is still there, but Raina is stronger and happier than ever. Together Kas and Raina have overcome so much and you can't help but feeling proud of both of them. They really succeeded in healing Raina (wink).
In this book it's those other demons, the traffickers, who will prove to be harder than ever to beat. Raina continues working alongside Kas and his team in the fight against The Ghost. But is she in over her head? Things get really heated and After The Rain becomes a suspense thriller. If it was hard to put down #1 and #2, you're in trouble with this one. It's so exciting, scary, thrilling, romantic, moving,... an emotional roller coaster that will leave you with a (book)hangover.
The unconditional love between Kas and Raina luckily remains unchanged among all that excitement, chaos and fear. I can't stress enough how incredibly moving it is to see what both have meant to each other, how much better their lives have become because of the other person.
The Rain Trilogy is an epic love story in a very real world.

About the author.
Karen-Anne Stewart has always adored reading and has now fallen in love with writing. Her written works are The Rain Trilogy: Saving Rain, Healing Rain, and After the Rain. Her debut novel, Saving Rain: The First Novel in The Rain Trilogy, was a nominee for the Book Junkie’s Choice Awards and is a nominee for the 2013 RONE Awards.

When Karen-Anne isn’t writing, she enjoys spending time with her family and friends, hiking, and visiting new places. She fuels her addiction of creating new stories by her only other addiction, caffeine, and listening to a myriad of musical genres. Tucked away near the Blue Ridge Mountains, Karen-Anne lives with her husband, daughter, two dogs, and their cat. She plans on writing new adult romance as long as her fingers maintain dexterity.

- The Rain Trilogy tells the love story between Raina and Kas. How did both characters come about?

First of all, I would like to thank you for having me on your wonderful website today, Maryline!  I knew that I wanted a powerful, healing love when I began writing The Rain Trilogy, but I also wanted it to feel real.  Raina is such a strong character but she is also fragile.  There's nothing weak about her, even with her self-doubts and emotional scars, she is a courageous fighter.  Kas is my favorite character, everything I dream of in a man ;).  He is strong, confident, protective, and has, what I call, a soft alpha male personality.  By alpha male, I mean that he is used to being in charge but he's not arrogant or unyielding, and he would do anything to keep Raina safe.
Kas and Raina come head to head on many issues, leaving them in some pretty heated arguments, but with their love and respect for each other, along with help from Chase, Kas' best friend, they always manage to overcome and make a formidable team.

- Are there any similarities between yourself and Raina, the main character? Do you share, for example, her love for music, the woods,...?

I am thankful to say that I did not live the life Raina had to endure, but, sadly, too many do.  Raina's love for iced hazelnut coffee and shaken iced green tea is totally shared by me!  Also, her love for music and languages are passions of mine, although I can't sing AT ALL and can't speak nearly as many languages as Raina does.   I live near the Blue Ridge Parkway, so a love for woods is also something we share.  Hiking is a fun past time, but I will have to admit that I am not much of a camper, unless there are warm showers available.  The other trait we share is being stubborn.

- What inspired you to write this story? The trilogy deals with the very difficult, hard issues of abuse and human trafficking and you yourself support The Polaris Project, an organisation that fights human trafficking. What made you write about these issues?

I have some experience working with survivors of domestic violence and their courage amazed me.  Human trafficking has been blowing up in the news and is spreading at such an alarming rate that I felt the need to include this depravity in The Rain Trilogy.  This series is my humble attempt to help shed some light on the dark issue of sex-slavery.  I learned about the Polaris Project while doing research about sex-slavery for the trilogy and was impressed with how they fight all forms of human trafficking in a holistic approach.  I'm currently hosting a fundraiser for the Polaris Project that includes a giveaway with 100 winners.

- The FBI plays a very important role in this trilogy, and especially in Healing Rain and After The Rain a lot of attention goes out to Kas' team and how they operate. Did you find inspiration with the "real life" FBI for those scenes?

The FBI, and other organizations, combat human trafficking on a daily basis, usually without any acknowledgment of how they put their lives on the line to save others.  I want to say THANK YOU to all the heroes out there who see the horrors of trafficking every day and sacrifice so much to rescue the survivors and put the handlers behind bars.  The sad reality is that there is much more trafficking going on than we are aware of because the groups are transient.  This form of abuse is highly under-reported.

- Can you reveal something about your future projects?

Currently, I'm finishing up Ash to Steele, a stand alone novel.  I have a few ideas that I'm playing with for future novels, including a paranormal romance and maybe a novel from one of the minor characters in The Rain Trilogy.  Here is just a small bit of an excerpt from Ash to Steele that I hope to have published within the first half of 2014:

Pure becomes tainted, clear turns murky, and innocence is only a fading dream. So it is with him; lines are blurred, gray becomes the norm, and everything I once held as absolute truth begins to wane. I can’t blame it on him. It’s my fault. I’m the one who isn’t strong enough, the one whose faith has been shaken. My entire world has been violently uprooted, tossed in the turbulent winds of a hurricane named Breck. I’ve been damaged…broken. Breck’s words come back to haunt me, There’s a consequence for every choice you make.

Readers can find out more about The Rain Trilogy and future novels at www.karen-annestewart.com , on twitter #TheRainTrilogy, #SavingRain, #AshtoSteele, and at Karen-Anne Stewart Author on Facebook.

I hope everyone has an amazingly wonderful New Year!!!!

Many, many thanks to Karen-Anne
for giving me the opportunity to read and review The Rain Trilogy
and for agreeing to this Q&A; lovely chat!
Geplaatst door M's Bookshelf op 10:53